Mosquitoes have an extremely limited range of about 300 feet in a single flight. Their wings have an extremely limited range of motion. The total rotational movement is forty-four degrees of the 360 degrees required to complete a full round. It implies that mosquitoes must pound their wings significantly harder than other flying insects in order to get themselves off the ground. The number of times they hit their wings in a second is approximately eight hundred. This is around four times the intensity used by most other flying insects.

This form of movement with small wings creates a vortex, which allows them to move. This necessitates tremendous quantities of energy.

Since mosquitoes are slow in flight, they are unable to travel far until they have rested. They can travel a long way from where they’ve been. It is just that they make their journey with stoppages rather than all at once.

Most species of mosquitoes do not like to venture very far from their breeding places unless they are facing difficulty in finding food. Most mosquito species travel little more than 50 to 100 meters from their nesting place. It is extremely rare to come across a mosquito that has traveled over a mile from its home habitat.

Having said that, there are some species of mosquitoes, like the saltmarsh mosquito, that are believed to regularly travel between twenty and forty miles from their breeding site. They have been seen to ride the winds at high elevations to try out new breeding grounds. Also, it is widely seen in some regions that mosquitoes expand their colonies at a time by several hundred feet.

Here are several mosquito species and their travel flight ranges:

These species are responsible for the Chikungunya, Yellow Fever, Dengue, and Zika virus’ spread. Aedes mosquitos fly only around 400 feet from their breeding grounds.

The malaria mosquito can travel great distances, perhaps spreading the malaria disease.It can get that high by riding high-altitude winds. They can travel hundreds of kilometers and continue to breed in their new territory this way.

Except for South America, Culiseta mosquitoes can be found all over the world. They have no problem flying up to 5 km from their breeding ground in search of food. The Culex mainly feeds on birds, mammals, and occasionally reptiles.

Also referred to as the Eastern saltmarsh, it can travel up to 64 km in search of a blood meal.

Culex is also known as the common banded mosquito. They can travel between 5 and 10 km from their breeding site.

These species have enormous mosquitoes that live in the continental United States. They can go up to 4.2 kilometers in pursuit of a large creature to feed on. It mainly favors tropical or temperate environments. 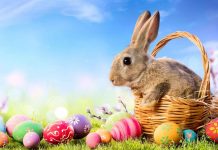 Where did the Easter Bunny and Easter eggs come from?